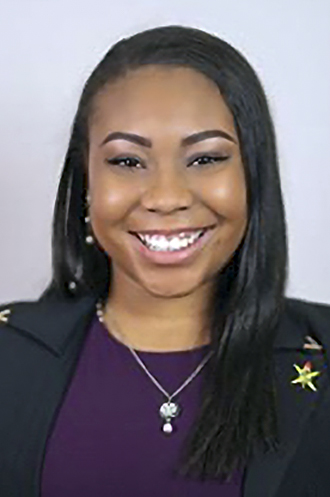 Past Positions in NSBE  Personal Interests Victoria Gray is a Systems Engineer at Northrop Grumman Corporation. She is responsible for the design and channel analysis of communication payloads. Victoria received her B.S. Degree in Electrical and Computer Engineering with a minor in Sociology from Duke University in 2016 and her M.S. Degree in Electrical Engineering from UCLA in 2020.

Victoria has been an active member of NSBE since 2012 and has held several leadership positions on both the chapter and regional levels for collegiate and professional membership. During her undergraduate career, Victoria presided as Secretary and President for Duke University’s NSBE chapter as well as Region IIs’s Public Relations and Publications Chair. Victoria currently serves as Region VI’s Professional Chair but has held other roles on the board including Pre-College Initiative Chair, Publications/Publications Chair, and Chair-Elect. Victoria strives to be a role model in her community by encouraging and inspiring youth to pursue STEM degrees. Through fostering relationships with individuals across the region, Victoria wants to help grow the society to its fullest potential.

Victoria believes that service to others is paramount so in addition to her NSBE leadership, she also has held a number of roles within her community. She has held positions as a part of the African American Task Group, an employee resource group (ERG) at her company, and she serves on several sorority committees as a member of Alpha Kappa Alpha Sorority Incorporated. She presently runs an online clothing boutique that sells clothes with designs that highlight self-love and scholarly aspirations for people of color. One of her best-selling shirts, Black Engineers Matter, was created in support of NSBE where she donated a percentage of the profits to the society in efforts of spreading awareness of the organization and supporting its mission: “To increase the number of culturally responsible Black Engineers.”